This past year, many new restaurants opened their doors in St. Louis.  Restaurant critics in the area have rated the top 10 and they are mentioned in the article below.  They all range in type of cuisine, price and environment.  We think you should go to a few and try them out!  What’s better than finding new spots to eat?

It was a very good year for the St. Louis food scene, if nowhere else. The year 2017 saw the city’s chefs, bartenders, owners and restaurants staking their claims and finally coming into what they were meant to be. It also put St. Louis on the national map, pushed into the spotlight by two restaurants in the conversation for the best new restaurant in the entire country.

These places don’t play it safe. One comes from a hometown son who realized that striking out on his own meant coming home and reclaiming the soil. The other took ownership of what it means to be a Mexican restaurant in 2017 America by brazenly throwing off preconceptions.

They weren’t alone. The city also saw immigrant restaurateurs boldly gamble on Midwestern diners’ willingness to embrace modern Chinese food and Bosnian chefs who, after years of seeing their cuisine fly under the radar, finally got the respect they deserve. A tenacious grocer and burger cook made it his mission to redefine the food system, while a James Beard Award-winning chef reclaimed the joy he felt in cooking.

We have a lot to look forward to in 2018 (including a handful of restaurants that opened too late to be reviewed and included in this list). But if there is any one thing the new guard can take away from the class of 2017, it’s that knowing who you are and being fearless in showing it is the path to success. And it tastes pretty damn good too.

If you want to know why Vicia (4260 Forest Park Avenue, 314-553-9239) is the best restaurant in St. Louis, you have to look beyond the food, the hospitality and even the environs. All are, of course, impeccable. Chef Michael Gallina’s mastery of flavor and texture can make you feel like you are eating a beet for the first time, even as, under his wife Tara Gallina’s thoughtful direction, every last person on the staff treats your dining experience as if it is of the utmost, personal importance. Then there is the design, a light-filled room that feels modern and warm at the same time. All of these elements make Vicia great. What makes it the best can be summed up in a scene I witnessed on one of my visits. It was a busy dinner service, and the restaurant was bustling, but chef Gallina not only made time to meet with one of his purveyors, he called all the staff members he could find to gather around his chef table to examine and learn about their wares. It wasn’t just his sous chef and line cooks who got in on the fun. He had servers, bartenders, servers’ assistants and even a dishwasher there, empowering them with a sense of a shared ownership that, in turn, translates to the guest experience. There is national buzz about this restaurant; it’s even a serious contender for USA Today‘s best new opening of 2017. If Vicia takes home the top prize, it’s because the Gallinas have created more than just good food; they’ve created a culture.

With Nixta (1621 Tower Grove Avenue, 314-899-9000), restaurateur Ben Poremba and chef Tello Carreon did not just defy the cliche of what a Mexican restaurant should be; they basically created a culinary fusion never before seen. Playing around in the kitchen of Poremba’s flagship Elaia, the Israeli restauranteur and the Mexico-born chef came to appreciate how beautifully Mediterranean and Mexican flavors work together. From that realization came Nixta, a tangentially Mexican restaurant that refuses to be pigeonholed by preconceptions. Just consider the one of the restaurant’s most exciting dishes, the tlayuda, which pairs pomegranate molasses with guajillo chiles for a “Mexican Pizza” that is just as much Middle Eastern as it is Central American. Though he is no longer with the restaurant, much credit must be given to Carreon, who used the cuisine of his native land as a jumping off point for global culinary exploration. The flavors are riveting, and the restaurant pulsates with a sultry energy. It’s no wonder the national press took notice of this thrilling spot.

If Gerard Craft’s Niche made you feel like you had to sit up a little bit straighter in your seat, its successor, Sardella (7734 Forsyth Boulevard, Clayton; 314-773-7755), gives you permission to sink back into it. The difference is intentional, born of the James Beard Award winning chef’s desire to shake off the heaviness he felt at his former flagship in favor of something lighter, breezier and more accessible. He’s achieved that in Sardella, not just by breaking free of Niche’s self- imposed hyper-local confines, but by giving diners, his staff and himself permission to have fun. You would have never sat in the old dining room for a burger, a whole roasted chicken or lasagna, but Sardella proves that you can have all those comforts while still enjoying the polish you’d expect from Craft and his team. “We open the restaurants we want to eat at,” Craft said when he announced Sardella. It turns out, we want to eat there too.

In the not-so-distant past, St. Louis diners had basically two options for Chinese food: The cloyingly sweet Americanized stuff that bears no resemblance to actual Chinese cuisine or the old guard traditional restaurants and dim sum spots that line Olive Boulevard. Recent years have seen a striking change to the Chinese culinary landscape as a crop of young, often first-time restaurateurs have given St. Louis a peek into what it’s like to dine out today in the bustling metropolises of their homeland. Bing Bing, Corner 17, Yummy 17 and last year’s honorable mention Tai Ke have all disrupted our ideas of Chinese food, and perhaps none more so than Cate Zone Chinese Cafe(8146 Olive Boulevard, University City; 314-738-9923), the quizzically named eatery from Daniel Ma and Quincy Lin. Both had toiled away at Americanized spots after first moving to town from China, dreaming that they could one day open a fiercely authentic yet thoroughly modern place of their own. They’ve achieved that in Cate Zone, with a menu of flawlessly executed and complexly spiced dishes that run the gamut of Chinese regional cuisine. One taste of the mouth-numbing Sichuan peppercorn-coated “Hot Crisp Fish” will have you realize what St. Louis has been missing.

When they started their journey into the world of ramen over three years ago, Qui Tran and Marie-Anne Velasco weren’t just looking to develop a good bowl of broth and noodles: They were on a mission to bring to St. Louis the absolute best. Their quest took them across the country, from New York to Los Angeles, where they learned from top chefs, including famed Japanese ramen chef Shigetoshi Nakamura. After teaching them his craft, he looked at them and said, “I have no doubt you will be successful.” The man knew what he was talking about, as Nudo House (11423 Olive Boulevard, Creve Coeur; 314-274-8046) has set the standard for ramen in St. Louis — if not the entire Midwest. St. Louis waited what seemed like an eternity to taste the duo’s classic pork tonkotsu, schmaltz-laden “Hebrew Hammer” and shockingly luscious vegetarian “Shroomed Out”; Tran and Velasco show that good things come to those who wait.

In the next few months you can look forward to several events related to beer and brewing (if you’re of age and enjoy this category of beverage, that is).  There is no need to feel the wintertime blues when you can plan on attending at least one of these six events.  Read about each beer festival happening around St. Louis in the article below, and if you end up going to one don’t drink and drive!  Rely on a safe ride from a taxi/car service like Chesterfield Taxi or a designated driver! 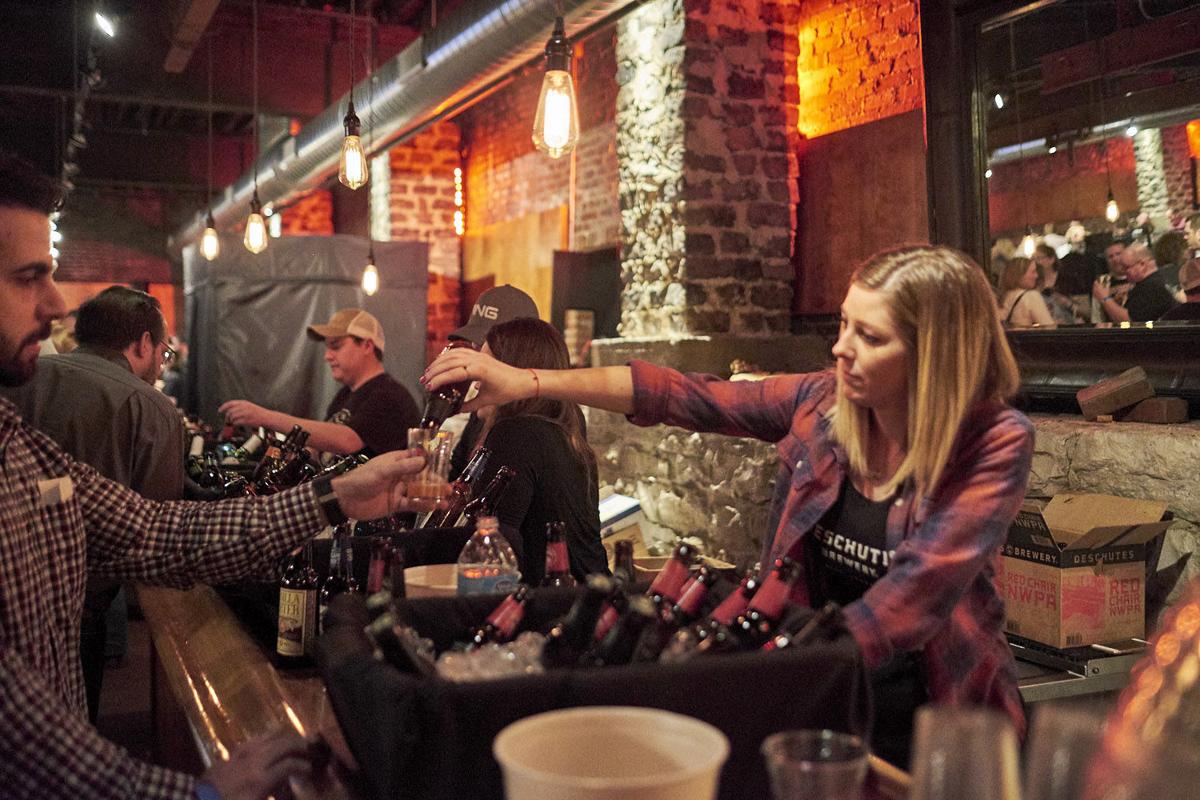 Yes, it’s only February. But spring training has begun, we’re tired of being housebound and we’re already drinking a beer. So why not preview some of the beer festivals taking place over the next few months?

When Thursday through Feb. 24 • Where Moulin Events & Meetings, 2017 Chouteau Avenue • How much $40-$43 • More info centennialbeerfestival.com

A VIP ticket, which includes tastings of rare and limited-release beers, is $25 in addition to the general admission ticket.

Other Centennial Beer Festival events include a five-course dinner at 6 p.m. Thursday with beers from Cathedral Square Brewery paired with dishes by chef Ryan Luke. Tickets are $65 (plus tax and a 20 percent service charge).

The Alton brewery honors its third anniversary with a celebration of pollinators, with beers featuring honey, flowers and fruit. More than 20 local breweries will offer tastings. There will be food available for purchase and live music.

The 10th annual Festivale is slated to feature tastings from more than 40 local, regional and national craft breweries to support the Gateway Chapter of the Cystic Fibrosis Foundation. A $65 ticket includes beer and food tastings as well as a tasting glass. The $85 VIP ticket lets you begin tasting an hour early at 7 p.m.

Tens of thousands of oysters are shipped to the Schlafly Tap Room for this beloved annual event pairing the bivalve with several variations of stout. Admission to the Schlafly Stout & Oyster Festival is free, with food and drink available to purchase. However, for $150 you can get the Pearl Pass, which includes unlimited oysters and beer (with private restrooms) from 5 to 9 p.m. March 23. There will be live music throughout the festival.

When May 4-5 • Where Forest Park • How much To be announced• More infostlmicrofest.org

The annual St. Louis Microfest features more than 100 beers for tasting over three sessions: 6-10 p.m. May 4 and 1-5 p.m. and 6:30-10 p.m. May 5. Tickets for these sessions and VIP packages (including tastings of rare and limited beer, a plate lunch or dinner, and a private hospitality area) go on sale March 1. Other activities include a home-brew competition, live music and the Goose Island Beer Co. demo tent.

4 Hands’ annual carnival celebrating the release of the brewery’s War Hammer IPA returns to Union Station for the second year. The event features tastings from several breweries (the exact list has yet to be announced) as well as live music and traditional carnival entertainment. Designated-driver tickets are $15.